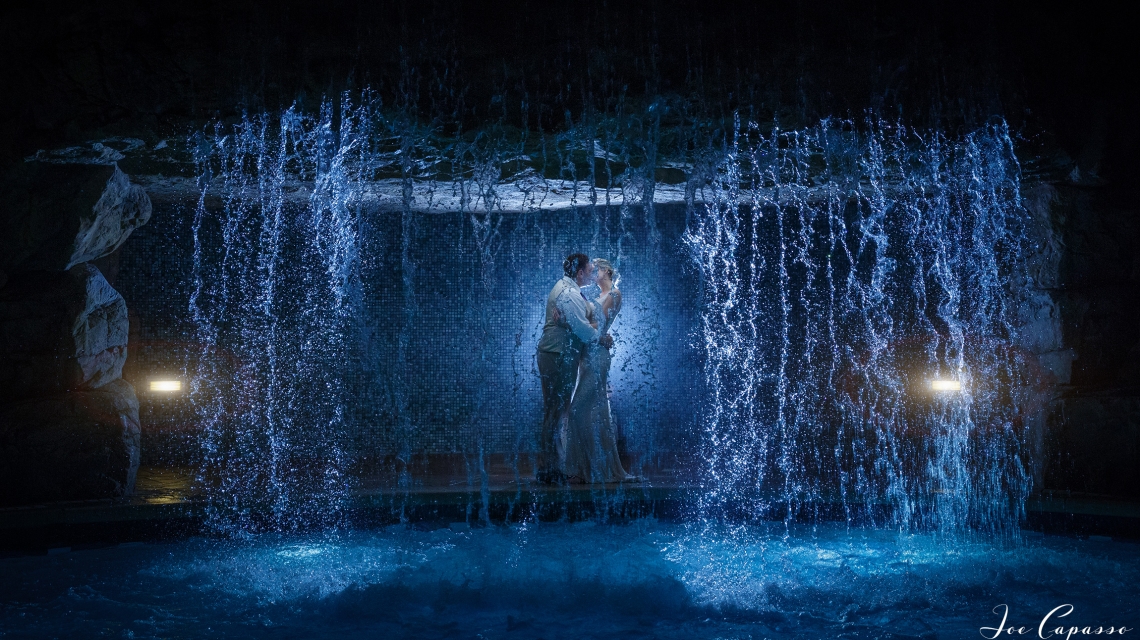 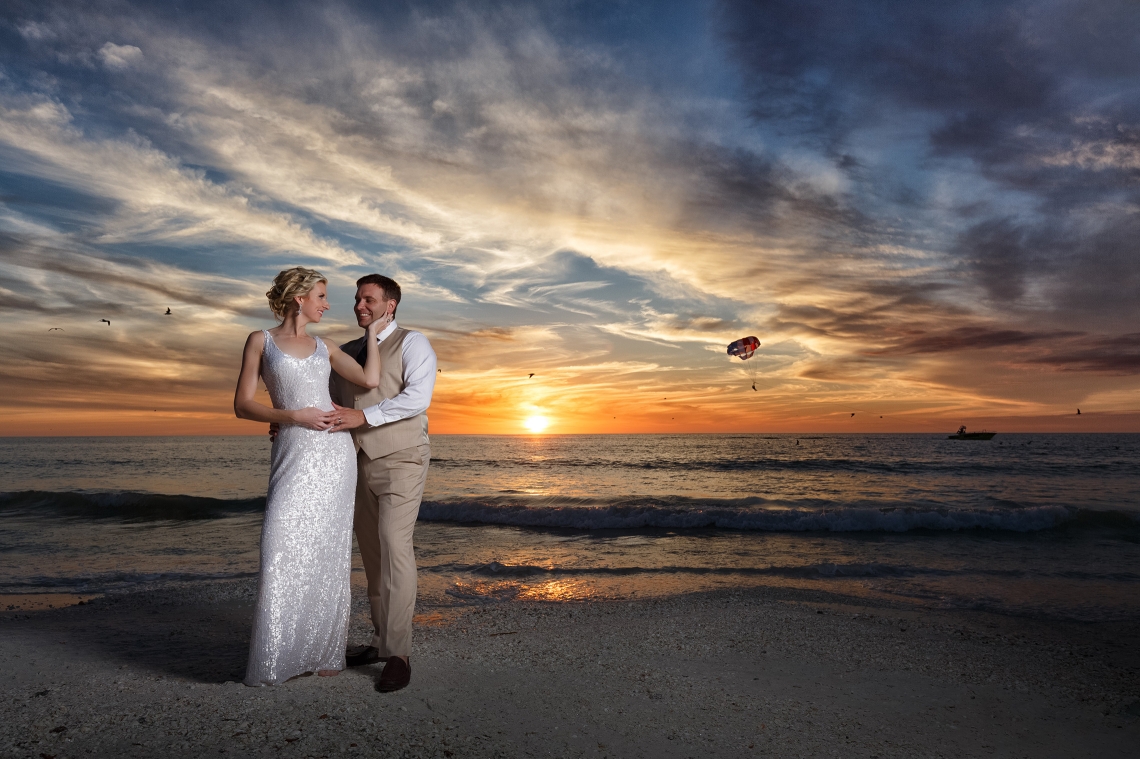 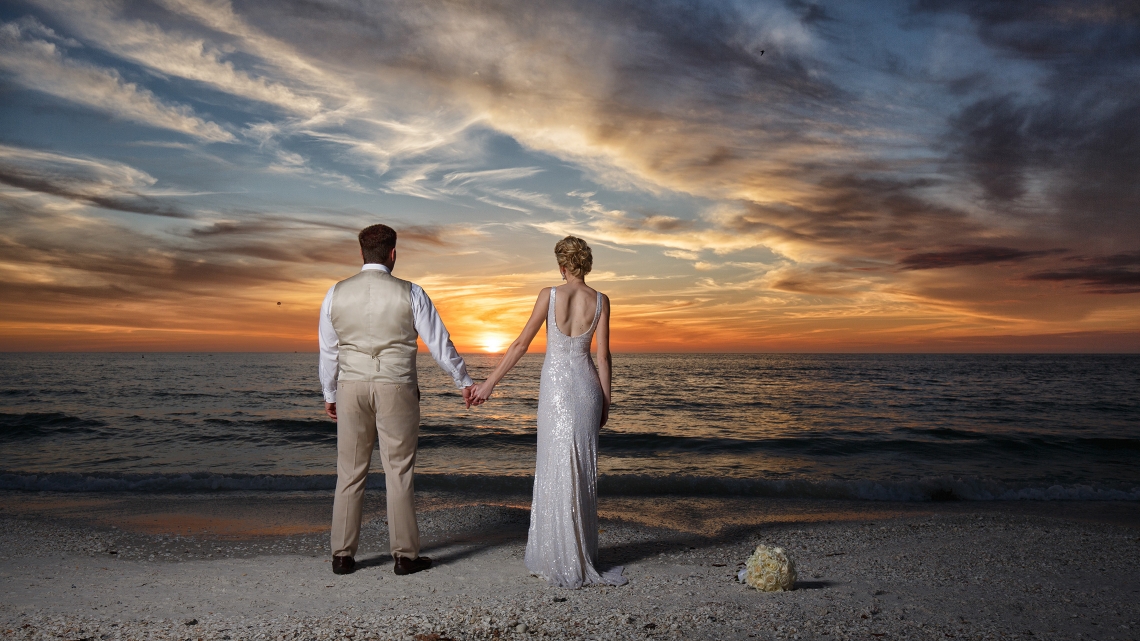 Kelly and Chris’ love story sounds like something out of a movie!  These two met on a Southwest Airlines flight when they sat next to each other!  Kelly was moving from Oregon to Illinois for a new job.  She says she hadn’t showered or slept in about 48 hours due to a hectic schedule, but Chris didn’t seem to mind!  They talked throughout the whole flight — and the rest is history.  Both Kelly and Chris love to travel, so Kelly was thinking Chris would pop the question on an upcoming trip to Marco Island, but he did it right before a Pearl Jam concert instead in an effort to surprise her.  She says the surprise worked 🙂  After a recommendation from someone else in the family, they decided on a Marco Island destination wedding.  We first met Kelly and Chris during their Naples engagement session.  Their beach wedding ceremony was held at the Marco Island Marriott, with a reception to follow on the hotel’s outside terrace.  The couple decided on a first look to give them more time for photos before the reception.  They even got to enjoy a bit of their cocktail hour.  The Marco Island Marriott is always a great place for wedding photography.  Not only does it provide the opportunity for beach sunset photos, but there are plenty of spots inside and outside for night photography.  The hotel is constantly changing, so there’s always new locations at this Marco Island wedding venue.

Our architectural photos are published in Gulfshore Life Magazine!  Some of our images from Naples, Florida are featured below, along with the text from the article.

Tucked Among Mediterranean-style homes in the secluded Royal Harbor Neighborhood, just to the east of Naples Bay is a stark white modern house built by young Naples professionals Arlington (Who goes by AJ) and Natalie Zellers. “I’ve always liked the extremely ultramodern look,” says Natalie, a co-owner of Opus Studio Graphic Design. “I even wanted a black swimming pool, but everyone talked me out of that.” The couple married in 2009 and were living in Berk-shire Lakes without any thoughts of moving when AJ, dad, Royal Harbor resident Tim Zellers, learned the waterfront lot with a tear-down house on it was for sale. The ability to design a house from scratch appealed to them, although AJ admits he didn’t think it would happen so early in life. They turned to their friend Tommy Houchin, of Houchin Construction, as their only choice for a builder. A third-generation member of the family business, Houchin had not done residential building in the past. Houchin then brought along architect Albert Dambrose, owner of Studio A.D.

“I didn’t know how to build anything, and now I’ve learned so much,” says AJ, who is a manager at Tamiami Ford. “It helped that Tommy was our friend. He brought a lot of magazines, books and design ideas to the table.” As a young couple, the Zellerses knew they needed to build a house that was affordable for them. “We didn’t want a monstrosity or a house that nobody would want to buy in 10 years if we want to sell,” AJ explains. “That, one reason we didn’t make it two stories.” They also built the house 1 foot above code so they didn’t have to carry expensive flood insurance. Dambrose created one design and after three minor modifications the final concept was chosen. The 3,300-square-foot house has four bedrooms, three and a half baths, a two-car garage, a pool and a dock. Today, the interior of the home is done in whites and grays with accent colors brought in through pillows, artwork and bedding. “I like clean and simple,” Natalie explains. “If you get sick of a color, it, easy to change the accents.” Although they drew inspiration from multiple trips to Florida’s east coast and Miami to look through contemporary showrooms, most of their furniture is from Casa Italia in Miromar Design Center.

Kitchen cabinetry was done by Hyland Custom Cabinetry in Naples and features European hinges and soft-close drawers. Appliances are by Bosch, including an electric cook top, a double oven and a wine cooler, among others. Viewable from the kitchen, the living room has a dark basalt accent wall and special lighting effects on its ceiling. The arched entrance to the dining room has commercial-grade, modular, wave-patterned panels that create a cave-like effect. The master bath is one of the larger rooms, providing plenty of counter space surrounding double sinks. A freestanding plastic tub is nearby. Cost efficient designs were selected of those that were more expensive. For example, they wanted to tile the entire walk-in shower but budget dictated, instead, only a glass tile stripe for accent. All the ceilings are flat, with linear air-conditioning diffusers and sound system speakers within the dry-wall. The floors are porcelain tile and the countertops are Caeserstone. When it came time for decorating, Natalie designed each room on paper first, filling a binder with ideas. She purchased most of the artwork online, selecting pieces such as Romero Britto for their nursery. What they thought would take a year took only seven months, and everything they selected met or exceeded their expectations. “It was stressful, time-consuming and kept me up at night, but there were no major snags,” AJ says. “I would definitely build a house again.” Meanwhile, in Royal Harbor, neighbors seem to appre-ciate their modern work.  Houchin even has a new client just down the street. “People stop by and praise it and ask us questions,” AJ says. AH
Architect: Studio A.D.
Builder: Houchin Construction
photography: Naples Photographer Joe Capasso

Hallie and Jose were recently married at the Club at Grandezza ! Check out some of the more traditional and dramatic portraits we captured of the couple below!  Grandezza is a beautiful wedding venue in the Naples, Florida area with lush greenery around the property and plenty of locations for photography. It has a large ballroom that can handle just about any event! Since Jose is in the service, Hallie wasn’t exactly sure if he was going to get time off for the wedding. It wasn’t until just a few weeks before the wedding that Jose got the OK for time off. Despite the uncertainty, Hallie planned a pretty big wedding anyway! We’re glad it all worked out! 🙂 Below Hallie tells us how she met Jose:

Jose and I went to high school together and we had mutual friends but we weren’t friends. It wasn’t till graduation time that I started liking him and then we talked for awhile but drifted apart. Then 2 years later I decided to message him and then the next 2 weeks we spent every day together until he went to boot camp. (The first time we actually saw each other in 2 years he came to my work and waited for me almost an hour to see me which I thought was pretty special). For the next 3 months we constantly wrote letters to each other. We both agree during the time he was gone is when we knew we wanted to be together. I knew he was the one one because from the beginning it was if we had known each other for a lifetime and didn’t have to act different to try to impress each other. He’s very respectful and loving to everyone around him and I knew he would be willing to do anything to make a marriage work.

Alyson and Lucas’ Tampa wedding is coming up in a few months!!  Here’s a few of our favorite images from their recent engagement session, and also a little something below from Alyson herself! 🙂

Lucas and I actually met from an online dating website called match.com and there is a hot debate between us on who contacted the other first! Of course, he contacted me first and I have the email to prove it! Lol! But seriously, that email changed my life. I took one look at his picture and knew that he was someone special. And the rest is history! We became engaged in February and quickly began planning for our wedding that will take place soon in Clearwater at the Holy Trinity Greek Orthodox Church and the reception to be held in nearby Tampa. Joe Capasso was the Photographer for our mutual friends wedding and when I saw his work, I knew that I wanted him to photograph our wedding as well as our engagement pictures! I contacted him right away and set up an appointment for engagement shoot at the University of Tampa and Davis Island. Both locations are unique and UT has a vintage vibe that I was looking for. Needless to say, the engagement pictures are spectacular and nothing short of amazing! We couldn’t be any happier with them and we are so excited for Joe to capture precious memories of our upcoming wedding!!

Courtney and Matt were married at the beautiful Casa Ybel Resort on Sanibel Island, Florida!  Casa Ybel is one of the oldest resorts on the island and has history as far back as the mid 1880’s.  The couple is from the Boca Raton area of Florida but decided to have their wedding here in Southwest Florida.  Courtney got ready at the Sanibel Harbour Marriott before making her way to Casa Ybel Resort for a small ceremony with her family and closest friends.